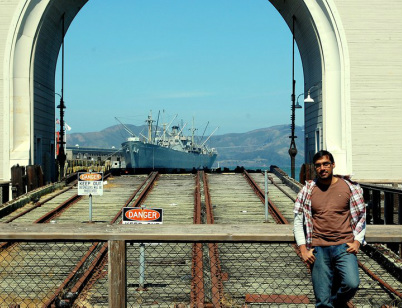 My primary research involves study of structural and functional brain aberrations in psychiatric conditions using neuroimaging methods and exploring their relationship with clinical symptoms and underlying genetic and neurobiological factors. My future research interest lies in integration and modelling of multilevel data across various modalities along the "genetics to brain to behaviour" axis. Such an approach would be targeted towards discovery of composite biomarkers that are diagnostic or prognostic in nature and hope to aid in personalized medicine.

Curriculum Vitae (with publications & awards)
​About me

Do I really need six fat paragraphs to write about myself?  Well, it depends on how bored/hungry I am.

If you ask a bunch of people , ‘what is the most awesome thing about being human?’, you would get various answers - intelligence, empathy, love, spirituality are some of them. To me, it is creativity and importantly, the ability to appreciate and question the very existence of nature. We all started our lives with constant wonderment exploring the world with eyes wide open. We were fascinated by almost everything - and thus began our quest to seek answers to the unknown.  The temperament of scientific inquiry is hardwired into the human mind. From the ancient Greek philosophers with fancy togas & beards to today's scientists with boring labcoats & goggles, the agenda is common.

Wanting to be a researcher is something which came naturally to me - almost effortlessly, as if someone who doesn’t try too hard, will end up being a researcher. Though, I did have tough time when the modern educational system asked me to choose ‘a path’ and specialize in something. I mean, I liked everything where you can think or express. I was sitting there on the bench, thinking about my polymath heroes – the ‘Da Vinci’, the ‘Copernicus’ , the ‘Newton’- the men who hated doing just 'one' thing, while my friends confidently chose a 'path' for themselves. For me, the cold objectivity of science is almost as seductive as the very personal strokes from a painter's brush. Picture a kid in the ice cream shop staring at colorful palette of flavors in the refrigerator and trying to choose 'one'. I was that kid. The question was not what to choose, but what to let go.

A few decades earlier, man learnt to exploit the biological processes in his own artificial environment [although some might say we have been doing it since centuries - since the cheese, bread and wine]. They called it 'Biotechnology'. The "DNA" quickly became the new word for “Blood", whenever people spoke of individuality and inheritance. I took a blind leap and studied biotechnology. I remember once a professor saying that it is not a science by itself, but just a collection of techniques. To be frank, I am not crazy about it, but it does provide you with set of tools to help you probe into the core fundamentals of nature. Then, there is a certain amount of a computer geek within me – a certain amount sufficient enough to be called as “addiction” by some people. But I am hopeful, as Steve Jobs puts it, that ‘the dots will connect someday’.

The universe has been around long time now and the best estimate is ~13.7 billion years. Yet, the sheer entropy from relatively ‘eyeblink period' of 3.5 million years of evolution of life on our planet ‘earth’ is sufficiently mind boggling. All of that we biologists study lie on this tiny end of the spectrum. Take human brain for example, there are more synaptic connections in a cubic centimeter of our brain than there are stars in the entire Milky Way galaxy. And we know that these numbers are just the tip of the iceberg, the real complexity lies in the processes - most of which we don't understand. But fortunately, science is very comfortable with uncertainties. Challenges are welcomed and mysteries run the business in the research world. Here at NIMHANS, I have just started to do my part in exploring the enigma of Schizophrenia - a terrible yet mysterious mental disorder.

At the cost of sounding extremely nerdy, learning has been among the most rejoiceful experiences to me - which is, by large, just gathering tits and bits from the floating sea of knowledge - the internet.  If you ask me [usually no one does], the internet is most impactful invention of recent times [Yes, I rank it above penicillin and personal computer]. Universities like MIT and Harvard strongly feel that online education is going to be next biggest paradigm shift in education since the invention of printing press itself.  I can't wait to see this revolution happen in my own lifetime - with a hope that it would open up the entire wealth of human knowledge to every person in the world, in the way that is accessible. This movement of free and sharable knowledge has sparked at a global level and developing nations, like ours, have so much to offer.