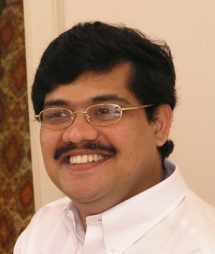 About Me
I am a psychiatrist by training & currently, I work as an additional professor of psychiatry at the Department of Psychiatry, NIMHANS.

During the medical school at the Stanley Medical College in Chennai (erstwhile Madras), my pursuit towards learning the basics of medical principles through the vast literature of various pre-clinical subjects (anatomy, physiology, biochemistry, pathology, microbiology & pharmacology) convinced me of the ‘Objectivity’ as the core requirement to understand the ‘Science’ of medicine.  Around this time, I developed avid interest in Neuroscience especially after getting to know the looks & functions of the brain through neuroanatomy dissections & neurophysiology lectures; the more I started learning about human brain the firmer became my conviction that “if the brain were so simple we could understand it, we would be so simple we couldn't” (Lyall-Watson).Given my inclination towards a research career from early days (however, with a very vague idea of what research actually means), I was convinced that rigorous scientific approaches based on “Objectivity” as an enticing future avenue.

On the contrary, with increasing exposure to treating human subjects during my clinical training, I was struck by the realization that ‘Subjectivity’ and person-specific approaches implicated upon empathy were essential in delivering cure – (the ‘Art’ of medicine).  Thus, as I progressed from pre-clinical training towards clinical learning in terms of recognizing the “diseases” & understanding the “illnesses”, I had to face the challenge of integrating the “Science” & “Art” of medicine.

Back at NIMHANS with a coveted faculty position after my post-doctoral training in Sheffield, my pursuits towards integrating the “Science” and the “Art” of Psychiatry while implementing treatment with concurrent search for overarching paradigms that can potentially explain the origins and more importantly the puzzling persistence of various severe mental disorders (in this context, it is noteworthy that the intriguing persistence of schizophrenia has been aptly termed by Huxely as the “Central Paradox” of this disorder) drew my interest towards evolutionary neuroscience and its applications in Psychiatry.  Significantly, I learnt that while application of the principles of evolution have immensely benefited various life science disciplines, lack of familiarity towards evolutionary biology has been a critical lacunae in medical training [Nesseet al. Medicine needs evolution. Science. 2006 Feb 24;311(5764):1071].

Motivated by the quest for understanding “Huxely’s central paradox of schizophrenia”, encouraged by the profound statement of Theodosius Dobzhansky that “Nothing in Biology Makes Sense Except in the Light of Evolution”, influenced by the Timothy Crow’s dogmatic assertion on the significance of brain asymmetry in schizophrenia pathogenesis eloquently articulated as “Schizophrenia is the price Homo sapiens pays for language” (though my views are to look for wider possibilities I am very much impressed by the approach principle) and inspired by the overarching Geschwind-Behan-Galaburda postulates (which can be aptly termed as a “large theory’ in Popper’s terms), the overarching theme of my research interest is to understand the evolutionary biology of human brain in the context of psychiatric disorders & exceptional skills [Venkatasubramanian G. Evolutionary perspectives on psychoses & autism: Does genomic imprinting contribute to phenomenological antithesis? Behavioral and Brain Sciences 2008;31(3):281-282].

While this ‘Creativity-Insanity’ interface is one of the important dimensions of this research focus, this theme has been influential in implicating certain other powerful paradigms like ‘Red-Queen’ effects towards understanding the link between psychiatric disorders and other medical diseases [Venkatasubramanian G. Schizophrenia, Cancer & the “Red Queen” Co-Evolutionary Dynamics. Medical Hypotheses 2009; 73(3):460].  These heuristics / hypotheses might currently be construed as mere ‘Panglossian views’; nonetheless, I believe that ‘distal’ rather than ‘proximal’ etiology based approaches based on the principles of evolutionary biology are critical towards the formulation oftranslationally relevant ‘Theoretical Models’ in psychiatry.

Contextually, ‘Schizophrenia’ – perhaps the uniquely human disorder, has been the major focus of my research studies.  The provocative view that “Schizophrenia is a component that was associated with the ‘Speciation Event’ which resulted in certain characteristic sapiens-specific traits that differentiated humans from the ancestral hominid species” has triggered immense interest in me to persist with my explorations on this intriguing disorder.  The striking biological aberrations in schizophrenia make me believe that biological approaches like psychopharmacology are and will bethe cornerstone in treatment principles (at least in the near future).  Nonetheless, this has to be complemented with ‘personalized’ & ‘artistic’ approaches incorporating psycho-social concepts & indigenous approaches.  I believe that neuroimmunological & neuro-metabolic theories of mind-body interactions complement the brain imaging research to understand neural function as well as aberrations.  To pursue these research interests, especially with clinical focus, I have initiated a unique special clinic at NIMHANS – The Metabolic Clinic in Psychiatry; along with this, I have been involved in a series of research studies that I chose to call as “Human Ontogenetic & Phylogenetic Evolutionary [HOPE] Studies” in Schizophrenia.

Over the past decade, some of my research works on the brain biology of schizophrenia have suggested promising leads towards link between systemic immune-metabolic aberrations and brain deficits.  Given the centrality of hippocampus and its network from the perspectives of immune-metabolic influences as well as fetal programming impact, one of my key research interests involves understanding the role of hippocampus in the pathogenesis of schizophrenia within a “systems biology” paradigm.

Nonetheless, the more I learn about the biology of schizophrenia, I am struck by the aptness of the Aristotle’s words that “The whole is greater than the sum of its parts”.  Although, I continue with my eternal struggles to understand the “whole” (i.e. schizophrenia) by ascertaining certain factors that I believe to be its “parts” (for example, brain abnormalities, immune-metabolic aberrations), these pursuits are self-fulfilling especially since these ‘scientific’ attempts facilitate my ‘artistic’ approaches as a clinician in delivering care.